During an interview by Christian Broadcasting Network ex CIA Director & New Secretary of State Mike Pompeo was asked
“Could it be that President Trump right now has been sort of raised for such a time as this, just like Queens Esther, to help save the Jewish people from the Iranian menace?”

He replied “As a Christian, I certainly believe that’s possible.”

David Brody and Middle East Bureau Chief Chris Mitchell sat down with Pompeo for an exclusive interview during his trip to Jerusalem.  The interview touched on politics, policy, and spirituality.

Pompeo is a professed Christian himself also stated, “It was remarkable – so we were down in the tunnels where we could see 3,000 years ago, and 2,000 years ago – if I have the history just right – to see the remarkable history of the faith in this place and the work that our administration’s done to make sure that this democracy in the Middle East, that this Jewish state remains. I am confident that the Lord is at work here.”

My question is this, what exactly got signed in that 2,000 year old basement while showing off blueprints of the New Temple? On the Jewish holiday Purim which just passed on Wednesday, March 20 and ended in the evening of Thursday, March 21.

You Tube channel https://www.youtube.com/channel/UCe1Zu5nd1F-NnlHzHkbW7Zg commentary writer and author extraordinaire Kimberly Ballard who also dabbles in outining and commentary on up to date esoteric end times prophecy stated in her video recently that she surmises the signing that took place in the tunnel could be a prerequisite to another agreement to take place on passover of a binding contract by President Trump to seal the deal of the century and pave the way for the building of the temple and the coming Jewish Messiah. 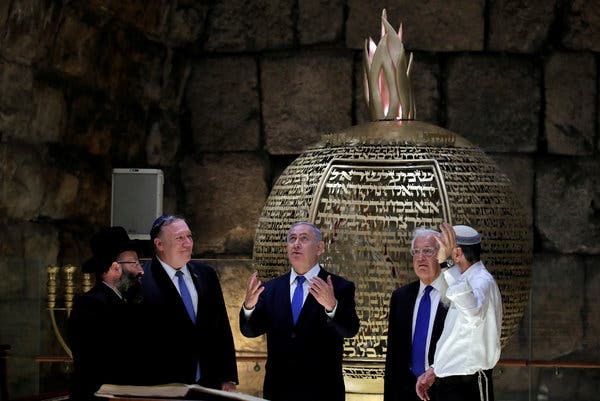 See the flip side of the Christian Zionist coin at “Know More News” on Youtube with Adam Green.    Mr. Adam Green is a thorough researcher, investigator and reporter on topics that describe some Jewish nation’s leaders who would like to make it illegal to have any opinion that doesn’t agree with the tyrannical Noahide laws written in the Talmud of Jewish Traditional Law.

According to one minority of very powerful Jewish radicals (The Sanhedrin) they would like to implement on us, ‘the Goa’uld’ I mean  us the “Goyim” severely prejudiced laws of conduct and punishments regarding thought crimes.

SIDENOTE:  Wasn’t the word “goyim” a word used for flesh eating zombies in the Stargate series?   Oh wait!  That was the Goa’uld

YouTube Author Mr. Green doesn’t mince words when explaining the political supremacy and out and out drive to rule the world that Israeli Jews exhibit in their own public testimonies.
https://www.youtube.com/channel/UCaRjFptz7970mppuiGuZtpQ/videos